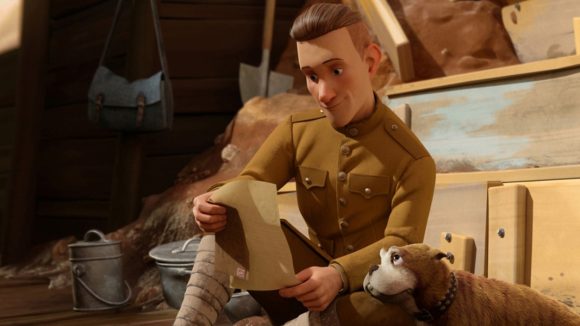 The film is based on the true story of a stray dog which bonded with the doughboys of the 26th “Yankee” Division at the beginning of World War I. Stubby was ultimately promoted to the role of Sergeant, the first dog to be awarded this rank in U.S. Army history.

Mikros, a Technicolor-owned studio, will work on the animation for the film in its Paris and Montreal locations. Mikros has most recently been involved with Asterix: The Mansions of the Gods and The Little Prince, and the studio is also working on Sherlock Gnomes and Dreamworks Animation’s Captain Underpants.

This is the first animated feature for the burgeoning Fun Academy Motion Pictures, based in Columbus, Georgia. The company’s president is Joseph B. Wilkinson, Jr., an eight-term member of Georgia’s House of Representatives who also spent 26 years in the United States Naval Reserve.

Currently, only a few studios produce animation in the southeast of the United States (Reel FX in Texas and Moonbot Studios in Louisiana being two of the biggest, although recent reports suggest Moonbot is shutting down and moving to Florida).

Fun Academy told Cartoon Brew that the production budget for Sgt. Stubby currently stands at $25 million and that the film is being financed through private investors and production tax credits. The company also mentioned that the Fun Academy web site is being re-launched in early December.

“The story of Sgt. Stubby is a universal human tale of an underdog who rises to extraordinary heights as a hero and friend,” said Richard Lanni, executive producer and writer of Sgt. Stubby. “This unwanted stray finds his best friend and together they survive one of the greatest conflicts in a young nation’s history. It’s a fantastic story for the whole family to experience together.”

The film is scheduled for release in April 2018, which will mark the 100th anniversary of the United States’ involvement in World War I.