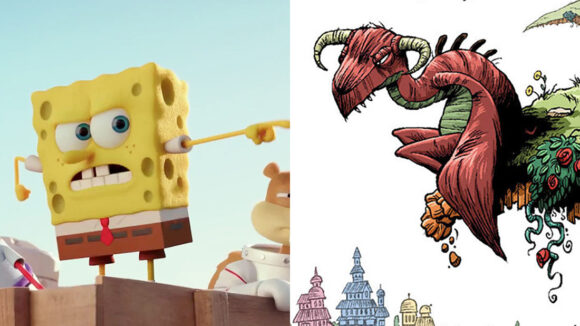 Paramount Animation, which has been bulking up its management ranks and recently stated that it was on a “growth track,” has unwrapped details on three new features. The announcement was made at Cinemacon, the annual Las Vegas meeting of theatrical exhibitors.

Monster on the Hill, slated for 2020 release, is an adaptation of Rob Harrell’s graphic novel. The logline from Paramount: “In a world where monsters are tame and monster wrestling is a popular sport, teenage Winnie seeks to follow in her father’s footsteps as a manager by turning an inexperienced monster into a contender.”

Monster on the Hill will be helmed by Bradley Raymond, a veteran director of direct-to-video Disney fare (The Hunchback of Notre Dame II, The Lion King 1-1/2, Tinker Bell and the Great Fairy Rescue) from a screenplay by Matt Lieberman (upcoming The Addams Family, Dr. Dolittle: Tail to the Chief) and Etan Cohen (Men in Black 3, Tropic Thunder, Madagascar: Escape 2 Africa).

Monster on the Hill will be produced by ReelFX, which first announced it was developing the project back in 2015, and Walden Media.

The new Spongebob feature, in partnership with Nickelodeon Animation, is now titled It’s a Wonderful Sponge and also for 2020 release. Tim Hill, director of Muppets from Space, Garfield 2, Hop, and the first Alvin and the Chipmunks feature, is writing and directing. Hill has been involved with Spongebob Squarepants from day one, helping to develop the series, and has worked on the series off and on throughout the years.

Luck, a previously-announced feature produced by animation upstart Skydance Media, has been picked up by Paramount. The film “pulls back the curtain on the millennia-old battle between the organizations of good luck and bad luck that secretly affects our daily lives.”

Dreamworks veteran Alessandro Carloni (co-director of Kung Fu Panda 3, head of story on first two How to Train Your Dragon films) directs from a script by Jonathan Aibel and Glenn Berger (Kung Fu Panda trilogy, Trolls). A release date of March 19, 2021 had earlier been announced for Luck, though that could change now that Paramount has boarded the project.

Despite Paramount Animation’s recent appointment of a new president — the former Dreamworks Feature Animation co-president Mireille Soria — the studio isn’t showing much appetite for pushing boundaries or distinguishing itself from the pack. The writers for all three films are tried-and-tested veterans of children’s fare — and like all of the studio’s previous efforts, the directors and writers of these films are all-white and all-male. It’s a reminder that just because women are being hired into top management roles doesn’t mean there’ll be a correlating increase of diversity in the upper creative tiers.

Perhaps the most interesting thing about Paramount is its decentralized approach to development and production. Both Monster on the Hill and Luck were developed by third-party studios, not Paramount Animation, and every one of its upcoming features is being produced at a different animation studio – Reel FX for Monster, Ilion for Luck, as well as Blur for the previously-announced Sonic the Hedgehog and a combination of studios for Spongebob, including Rough Draft for the 2d segments. This diversity of animation producers — and the different creative approaches they each have — should help to break up the visual “house style” monotony that defines some of the other American majors.