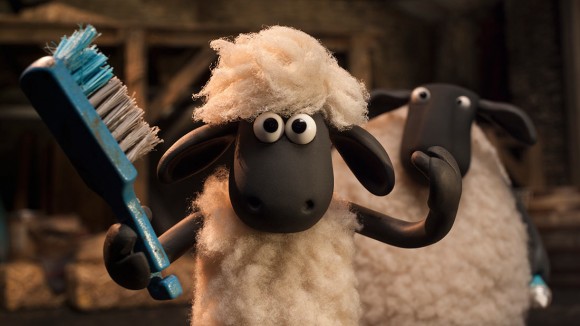 Aardman Animation’s ambitiously dialogue-less feature film adaptation of its Shaun the Sheep stop-motion television series, created by Nick Park, is already a critically acclaimed wonder with a 99% rating on Rotten Tomatoes, the highest for any U.S. animated release this year. But can American audiences appreciate it enough to crowd out more distracting, less rewarding fare?

When Cartoon Brew asked if Shaun the Sheep Movie would translate stateside a month ago, some Aardman fans admitted they didn’t even know the film was coming out. But it has indeed arrived in style with film critics, some of whom spend their review time not only musing on its deceptively simple accomplishment but also wondering why cinematic experiences like it don’t happen more often.

“Shaun the Sheep, among its many virtues, shows that not only can a feature length animated film sustain its narrative momentum sans dialogue but shows that kids will sit for it and applaud at the end if the effort is in service of a good movie,” said Scott Mendelson at Forbes. “I am once again in absolute awe of the time, patience, and craft that goes into making a stop motion animated feature. But it is also, in its own unique way, an outright challenging and thus surprising artistic triumph.”

“Playful, absurd and endearingly inventive, this unstoppably amusing feature reminds us why Britain’s Aardman Animations is a mainstay of the current cartooning golden age,” added Kenneth Turan at the Los Angeles Times. “Given that no one says so much as a word, it’s remarkable that Shaun the Sheep can sustain its inventiveness, both in terms of overall plot developments and small moments of comedy.”

Despite the fact that Shaun the Sheep, like most of Aardman’s output on television and in theaters, is condescendingly considered to be strictly for kids, some reviewers have placed its performance and execution amongst the higher echelons of cinematic history.

“The style and humor of this piece, from writer/directors Mark Burton and Richard Starzak, is reminiscent of the films of Jacques Tati or even Chaplin,” said Pete Hammond at Deadline. “In fact, in terms of pure comic chops, it could just be the funniest movie of the year PERIOD when all is said and done. It is a hilarious, beautifully droll gem of a film that is pure genius.”

Shaun the Sheep is also a thumb in the eye of most Hollywood fare that purports to teach children life lessons, when what they are really doing is selling studios and toys. This is in itself a triumph of innocence over cynicism, which is to say exactly what children, and adults, deserve from cultural production.

“Refreshingly for children (but especially for adults), there are no lessons to learn and no faults to admonish. Instead, it’s an 84-minute, dialogue-free distillation of all the innocent fun we wish childhood could be,” said Inkoo Kang at The Wrap. “In a movie culture with near-inescapable CGI, old-fashioned animation like Shaun the Sheep is always a treat — and a romp this ambitiously aimless is an all-too-rare marvel.”

What problems few critics, including Kang, could find with Shaun the Sheep were incidental at best. The Hollywood Reporter argued that its plot could be padded with too much wool in an otherwise positive review. Variety pointed out that its scope was noticeably lower than Aardman’s Wallace and Gromit feature films — which is perhaps an indirect way of suggesting that its budget should have been larger. But the greatest counterargument to these half-hearted critiques is that many critics didn’t even bother to review the film at all, when some of them seemed to have no problem watching, and then mercilessly slamming, Sony and Adam Sandler’s predictably execrable Pixels.

In the final analysis, Shaun the Sheep Movie is one of those amazing, singular films whose production and reception says much more about the process of production and reception itself, rather than the film’s narrative and structure, which makes it something of a testament to our sadly lowered expectations in an age of bloated budgets. As such, Shaun the Sheep should be a lesson to filmmakers and studios everywhere that bigger, louder, and dumber in no way leads to better or lasting cinema. If Aardman can construct a comparatively cheap, critically acclaimed masterpiece of painstaking artistry, in which no one speaks a word or blatantly sells an ancillary product, then why can’t everyone?