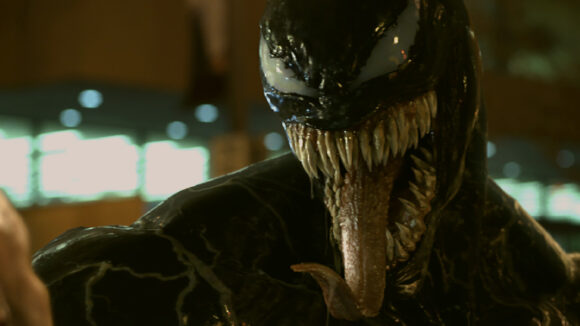 DNEG was the principal visual effects studio behind Ruben Fleischer’s Venom, the first movie in Sony’s Marvel Universe, which has opened to a massive weekend. The film depicts a grotesque shape-shifting alien “symbiote” that inhabits the body of journalist Eddie Brock (Tom Hardy), but DNEG’s role was far wider than just the creation of that central cg character.

Indeed, the studio was required to produce a diverse range of Venom entities, including an amoeba-like incarnation, tendril extensions of Brock once he is inhabited by the alien form, several gory transformations, and a detached appendage known as the ‘Wraith’ Venom. DNEG even had other Venom-like symbiotes to create, such as Riot and She-Venom, plus a stunning combo-symbiote seen during the film’s final confrontation.

DNEG and production visual effects supervisor Paul Franklin, who worked alongside fellow supervisor Sheena Duggal, oversaw the crafting of these many and varied Venom visages. He shares with Cartoon Brew how each of them came to life.

Before it takes over Brock’s body (and the bodies of others), the symbiote is seen as a constantly shape-shifting amoeba-like creature. “We spent a lot of time looking at things like sea creatures, mollusks, slime moulds, microbial organisms, amoebas, and hydra, which are these microscopic creatures that live in water,” said Franklin. “And we looked at fluids, oil, and non-Newtonian fluids. There are these videos on Youtube (see below, for an example) where people mix up corn starch and put that on a speaker cone and run sound vibrations through it. The liquid takes all sorts of interesting shapes.”

DNEG ultimately made an underlying animatable blob structure as a rig with extrudable tentacles, and then applied layers of effects animation over the top with a final porous look that revealed the complex layers. That work, along with other animation and effects for the film, was overseen by animation supervisor Troy Saliba and digital effects supervisor Aharon Bourland. DNEG’s visual effects supervisor was Andy Lockley. (One of Us was also a vfx studio on the film.)

“What we actually found as we continued to develop it was that unexpected things would happen,” added Franklin. “The way that the layers of a membranous tissue would fold over on themselves gave this very complex rolling motion. But at the same time, it all had this sense of purpose to it because it was being driven by the intent of the animators in the first place.”

Once the symbiote begins taking control of Brock’s body, it very soon allows human limbs to become powerful tentacles and tendrils. “That all came out of the same research and development that created the raw symbiote,” said Franklin. “So there was definitely a sense of continuity between them. And then the actual tentacles themselves – the thick, muscular ropes that come out of him – their surface textures are a bridge between the raw symbiote, and then the final finished version of the humanoid Venom.”

DNEG’s fully cg Venom stood 7’6”. On set, a tall stunt double with a helmet to make him even taller stood in during filming for several Venom shots. However, so many scenes required the character to be leaping or climbing or performing dynamic superhero moves that the stand-in was often only used as a framing guide. Previs by The Third Floor and DNEG helped with imagining high-action shots. On set, balls that were spray painted glossy black and matte black helped establish what kind of reflective qualities Venom would have.

DNEG’s goal in building and animating a fully cg creature was to avoid him looking like someone wearing a rubber suit, according to Franklin, who also notes that much attention to detail was given to surfacing.

“We went through a very, very extensive development process where we tried out all sorts of different surface finishes including matte finishes that looked in some cases a little bit like shark skin finish. Venom in our movie was in primarily nighttime settings, so it was going to be difficult to see him if we made him completely matte black. But on the other hand, if we made him completely shiny, he just looked like he was made out of black chrome. So the DNEG team came up with this clever solution, which was a semi-dry look. He’s wet, but it’s not consistently the same wet look all over. It’s sort of smeared and organic.”

At several points in the film, Brock is shown being transformed into Venom, and vice versa. Perhaps one of the most spectacular shape-shifts occurs as Venom tentacles fold over themselves to form a face, revealing a mass of teeth, tongue, and signature white eyes. “For that,” said Franklin, “we didn’t just have this cg suit zipping tight shut over Eddie’s face. It’s a much more asymmetrical, lopsided, abstracted version of the character that is forming around Eddie, all over him.”

The animation team provided the underlying timings while the effects artists ran dozens of fluid, muscle, and skin simulations to achieve the final transformation. Franklin says there were about 30 to 40 iterations of the final shot that had to go into an early trailer, with continued refinement for the film’s release.

“The final feature version of it has very, very subtle layers of goo forming over Eddie’s skin,” Franklin noted. “It starts subcutaneously. You can actually see these black veins worming their way under Eddie’s skin, and then the goo moving over the surface of the skin, followed by the waves of tissue and the mesh of the gums, and then the teeth all sliding into place, and the eyes moving like distorted fried eggs over his head.”

Brock is rattled by having Venom inside him. As he battles this demon, Venom’s head even extrudes out like a giant snake, and has a conversation with Eddie. Inspired by some comic panels showing a distorted serpent-like version of the character, DNEG crafted what they called ‘Wraith’ Venom, adding in extra tendrils and veins to the multifaceted creature.

“The idea was that we were seeing the underlying structure within Venom’s body being strewed out from Eddie’s body,” said Franklin, “and that the Wraith Venom had something of the quality of the original symbiote, so that you could see that there’s a direct lineage between the raw symbiote on its own. The face of Wraith Venom is not the completely formed smooth version that you see when he fully realizes as a humanoid. There’s this almost ghostly, emaciated quality to it.”

Brock’s infiltration by Venom causes some troubling side effects, including where the characters are subject to certain high frequencies of sound from music and an MRI machine. On screen, that look was achieved with a blurring of Hardy’s face that occasionally reveals some of the creature within.

“We called it the sonic freak-out,” said Franklin. “We made a ghostly effect where it’s almost like the symbiote is being vibrated out of Eddie’s body, and we went through quite a few different incarnations of what this would be. We ended up body tracking Tom Hardy’s performance, and then using that to drive just a very straightforward animated version of Venom. The compositors then figured out how to do this vibration effect, which is lateral vibration in the horizontal axis.”

The film’s villain Carlton Drake (Riz Ahmed) is himself taken over by a symbiote and becomes the creature Riot. DNEG built the character in a similar way to Venom, but made Riot more extreme. “He’s got a full foot of height over Venom and he’s got this massively developed physique,” noted Franklin. “He’s got extremely large talons and claws. He’s furious, and dangerous the whole time, and we wanted to really make sure that contrasted with Venom’s much more organic, fluid, slick persona, and physical presence.”

Brock’s former lover Anne Weying (Michelle Williams) is also briefly consumed by the symbiote and becomes She-Venom. DNEG looked to comic book reference, weighing up the various depictions that ranged from, according to Franklin, “demonic creatures with elongated teeth through to the extreme hypertrophied female form.”

“Finding something that would actually sit in this world was important – it couldn’t be too outrageously cartoon-like. At the same time we wanted something that was both a little bit sexy, but also a bit on the disgusting side, so that when you get the kiss between Brock and She-Venom, it’s on the edge of being a little bit icky.”

Riot and Venom end the film with a brutal fight. The symbiotic nature is reaffirmed in several shots which reveal their amorphous qualities, and the humans ‘underneath’ them; at one point Venom reverts to his semi-liquid state and tries to merge with Riot to stop him. DNEG had to imagine that combined character with bespoke concept art, and then a dedicated animation rig that allowed for extreme distortions.

“Their bodies are very elongated, and they’re expanding and becoming quite monstrous and then wrapping around each other,” said Franklin. “So the rigging team created these very flexible rigs, which we refer to as the Gumby rigs. Again, the effects animation team ran incredible simulations to produce a roiling sea of gooey flesh. It’s almost like you’re watching a three dimensional Jackson Pollock painting with the characters in the film.”

A major component of Venom turned out to be his tongue, almost a character in itself. Franklin says the tongue was not necessarily that difficult to animate, but what proved challenging was “figuring out when to deploy it, because in the comic books Venom’s tongue is out pretty much the whole time! It’s one of his defining characteristics, but of course if you overused it, it became boring, and you stop noticing it.”

“The other thing was,” added Franklin, “it was impossible to take Venom seriously when he’s talking if he had his tongue out. This is because he would just be lisping and slurring over this giant ropey sausage that was hanging out of his mouth. So we’d have to pull the tongue back when he’s talking. In the comics, they have no such restrictions. You’ve got this giant three foot tongue lashing around as he’s delivering a sarcastic one-liners and taking out his enemies.”