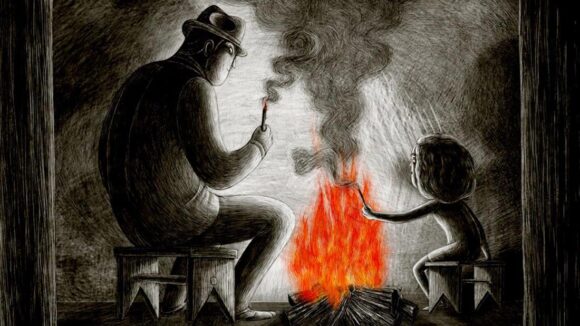 Regina Pessoa likes misfits. Her last two shorts, Tragic Story with Happy Ending and Kali the Little Vampire, centered on characters whose strange traits alienate those around them. In her latest film, Uncle Thomas: Accounting for the Days, the Portuguese animator and director turns to an outsider closer to home: the uncle of the title.

After Uncle Thomas’s death, Pessoa decided to pay tribute to her relative, an eccentric, introverted man who was obsessed with cataloguing all aspects of his mundane life. Although he lived on the margins of society, he’d occupied a central place in Pessoa’s childhood — this, after all, was the person who taught her to draw.

Uncle Thomas: Accounting for the Days is the first of Pessoa’s works to deal explicitly with autobiography. But it also marks an aesthetic departure. Whereas her previous films were works of 2d animation, this one alternates between that medium and stop motion, incorporating both her uncle’s extensive documents and his habit of drawing on walls. Here, she tells Cartoon Brew how she developed this hybrid approach.

Pessoa: I started working in animation using analogue techniques. I never studied animation. I studied art and painting for five years at the Oporto Fine Arts School. So, naturally influenced by my background in art, I have a preference for organic textures and I like to explore rich visuals, shadows, and light. [My first two films were animated with] engravings on plaster plates [and] black ink on paper.

For Kali the Little Vampire, my producers told me that I’d have to transfer my style to a digital format. After some experimenting, I found my way, “forcing” the computer and software to “work for me” rather than me working for the machine. For Uncle Thomas, my challenge was to combine my analogue past with what I’d learned using software and tablets, and mix all this together in a coherent way, staying true to my personal visual language.

[I visited my hometown] to take pictures and get inspiration for the point-of-view shots, for instance. I preferred to hand-draw the POVs instead of basing them on live video footage or a 3d setup, because I prefer inexact perspectives and movements; they look more like “memories” this way.

Thanks to [Uncle Thomas’s documents] I could see what I looked like when I was little; those pictures were very helpful in depicting the little girl in the film. Also, just after Uncle Thomas’s death and before his house was totally renovated, I did a compete photo survey of both the house and the surrounding area, and this also helped me with the indoor and outdoor backgrounds.

Pessoa built up layers digitally for the hand-drawn portions of the film to achieve an engraved look.

Pessoa: I always wanted to use mixed media in this film because, as it was a tribute to my uncle based on real facts and events, it made sense for me to use his notes and objects. I developed some animation tests, and kept experimenting with ways to animate Uncle Thomas’s papers and objects and to integrate this stop motion with my 2d drawing style, until I was happy with the result.

I was very familiar with Uncle Thomas’s materials, like his objects, accounting sheets, and daily routine. But I had never read his diaries; Uncle Thomas kept those private. Only some years after his death did I dare to start reading his diaries. Their content confirmed what I already knew: he methodically described his daily activities in his restrained, polite, and unique vocabulary, never using vulgar language, even when he was upset with someone. I used some of them in the film.

What was strange for me was finding two documents in particular: a draft of a letter, obviously to a woman, someone unknown to me — I don’t know if he ever dared to send that letter — and two pages containing a long, fastidious, and obsessive dissertation on the number seven. I decided to combine both and use this mix in the film to accentuate his obsession with numbers and calculations.

Pessoa: [I wanted] to create animated drawings directly on walls, like I used to do with him when I was little. For the lady on the wall, I used a drawing that Uncle Thomas had done, and for the man I used a portrait of Uncle Thomas that I’d created when I was little [see right], which I’d found among his belongings.

My producer Julie Roy [at the National Film Board of Canada] wanted to try something different from our previous co-productions. As I now have quite nice facilities in Portugal, we thought it might be interesting to invite one or two Canadian animators to work on the [wall] scenes. Julie knew Sylvie Trouvé and Dale Hayward from previous projects and proposed that they come for a period of three months.

They stayed with their family in one of our houses and animated in our studio. We built a real set, with walls and a window, and this close proximity with the animators allowed for better dialogue between us, so we could have daily discussions about the scenes and get a consensus on how to build them. Each image took 20 minutes to draw, so the whole scene took around four days to shoot.

Pessoa: I used Photoshop for the 2d animation, Dragonframe for the stop motion, and After Effects for the compositing.

See more about how the film was made in this short documentary by Arte (in French).