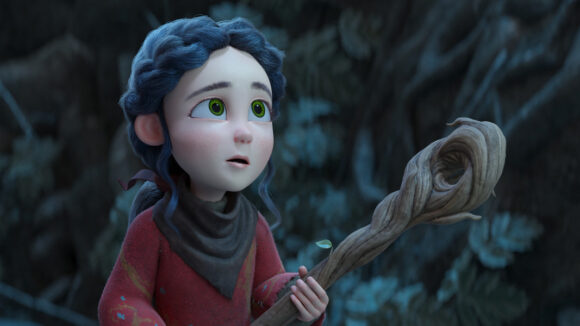 Blender has a long-standing tradition of making and releasing short films to demonstrate the capabilities of its open-source cg software. Their latest effort, which premiered online this morning, is Spring, directed by Andy Goralczyk, which sees a shepherd girl and her dog come face to face with some ancient spirits.

Spring was made via the Blender Institute and Blender Animation Studio. It was funded and distributed through Blender Cloud, the online platform that allows for artists to directly connect with supporters as a project is produced. Fourteen artists helped make the short.

Cartoon Brew spoke with members of Spring’s production team in a step-by-step breakdown of how the ancient spirit Alpha character and a specific scene from the short were achieved in Blender.

“First, we collected a lot of reference and inspirational material,” modeling and shading artist Julien Kaspar told Cartoon Brew. “Then, we discussed it with director Andy Goralczyk and started developing and exploring the key shapes. This phase of conceptual sculpting was very iterative and fun, since there were few technical constraints and we could focus our efforts on getting the overall feel for the creature right.”

Once the concepts were approved, Kaspar then created a base mesh with good topology, on top of which the team could add the desired level of detail. An essential step in this process was UV unwrapping, since artists would use UV maps both for texture painting and baking. “At this point,” notes Kaspar, “the character had to be shipped to the rigging department for an initial rigging pass, since we needed the character for several layout shots. This introduced some more constraints into the process, but we dealt with it.”

The base mesh was subdivided using Blender’s Multiresolution Modifier (Multires) and further sculpted to add more detail, which was partially baked into textures. “We always aimed at the best possible balance between character detail and playback/rendering performance,” said Kaspar. Then in addition to sculpt baking, Kaspar worked on texture painting and shading, using many of the textures available in the Blender Cloud Texture Library.

At one point, the Alpha provides Spring (the girl) with a chime for her staff, but it soon falls and flies off to cause a stressful moment. The team had to choreograph that moment by producing their own reference video. “The main goal of the reference pass,” said animator Nacho Conesa, “was to find the key story poses that would convey Spring’s stress. After a few reviews with animation director Hjalti Hjalmarsson, we decided to do a new reference pass with a different angle, since what we had lacked enough intensity.”

In order to handle the complexity of the character’s rig, the team used a couple of tools inside Blender. “The first was Selection sets,” outlined Conesa, “which are predefined groups of controls that allow selecting and posing specific portions of the character with a certain level of detail. Then there was the Pose library, not used for the Alpha shot but useful for other characters. This was made up of a number of pre-made poses for specific parts of the characters – usually face and hands – which greatly speed-up the animation process as they provide a good base for the animator for achieving a pose and keeping the character on model.”


“In the new reference pass,” said Conesa, “I also made sure that the timing of both Spring and and Autumn (her dog) worked well together and make the shot as readable as possible. The shot took approximately three weeks to animate. The first two weeks were fully focused on getting a presentable splined version, and the following week was dedicated to polishing the shot, while starting to work on a new one in the sequence.”