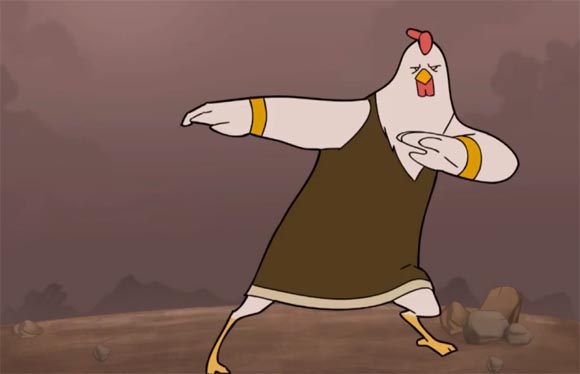 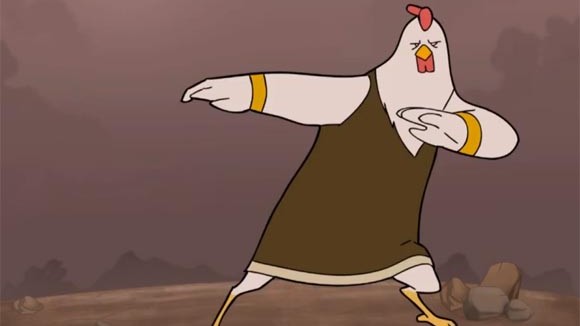 When an animated film is submitted from Nigeria, I sit up and take notice. That’s because it doesn’t happen often. In fact, it never happens. While Nigeria has a robust live-action film scene—so much so that its film community has earned the nickname Nollywood—animation has never figured into the country’s creative culture. That’s changing, however.

Earlier this year, I posted about a Nigerian children’s show called Bino and Fino. More recently, I received a submission for the animated short Chicken Core: The Rise of Kings directed by Oricha Aliyu. An extended version of the short was released a couple days ago:

The short is a remarkable accomplishment when one recognizes that the artists who made the film are self-taught and that they are creating cartoons in a country with no history of animation production. They are the pioneers who are building their country’s animation industry from the ground-up.

The studio responsible for Chicken Core is Sporedust Media. The company’s CEO Shina Ajulo spoke last month at TEDxVictoriaIsland about how he became interested in animation and decided to start a company with his friends:

I reached out to Sporedust and asked if they could tell me more about their studio and the general state of the animation scene in Nigeria. They responded with the following:

Sporedust Media is based in Lagos, Nigeria and began producing animation under the Sporedust brand in May 2012. We are still growing and currently have twenty-five personnel including animators, script writers, background artists, music composers/sound engineers, inkers, app game developers, marketing, strategy, finance and accounting. Some of our staff overlap especially across animation and inking. And one of our script writers plays several roles in voice direction, storyboard development and backgrounds.

As you rightly mentioned, there is little info about animation in Nigeria as the industry is practically non-existent. There are tiny silos of animators, but with little funding to meet animation standards, these groups create short clips and never really grow to their full potential. Without an industry, it’s hard to place a finger on animation schools. We’ve heard of a few but we aren’t certain of their capacity or content.

Our animators are self-taught. Our skills were built through observing styles of different animation cultures including Disney from the US and anime from Japan. Additional skills were amassed through tutorials online. But with true love for animation, we grab onto any learning opportunity we can, understand the fundamentals of weight and balance and attune ourselves to animation technology. We used Toon Boom software for Chicken Core: The Rise of Kings.

Interestingly, there is a huge animation community in Nigeria comprised of animation lovers and gamers. You see them at anime swap meetings or gaming tournaments; the latter is periodically organized by our marketing arm. However, this group feeds off foreign content. The love for indigenous creations is greatly supported when short clips like ours are released with numerous positive reviews cheering our cause. But with little backing from a broader industry, there is little continuity.

Regarding animation producers, it is difficult to say from our viewpoint. We know there are skilled animators within the region but there is no solid community aligning our collective ideas. Nevertheless, we are highly optimistic in our goals to “animate the future” and with continued support, we will move beyond these obstacles.

As their letter makes clear, Nigeria’s animation industry won’t pop up overnight. There are countless industry-specific issues to contend with ranging from animation education to widespread availability of digital technology to institutional support for the artform before Nigeria can have a robust animation scene. Nevertheless, it’s exciting to see shorts like C‪hicken Core: The Rise of Kings‬ and TV series like Bino and Fino. If not the first pieces of animation from Nigeria, these projects represent the birth of the animation industry in one of the world’s most populous countries, and it’s only going to grow from this point forward.