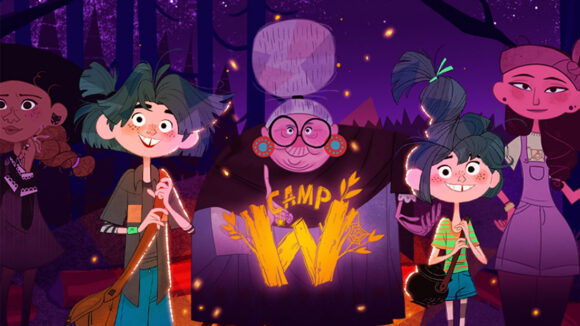 The bi-coastal Psyop, which has recently fully integrated with Blacklist, is best known for its work in the commercial arena, having created campaigns for major brands that include Nike, Coca-Cola, and earlier this year, a well-received advertisement for Travel Oregon. But interactive apps are a new area for the company. We spoke to them about what inspired the company’s push in this new direction.

Camp W tells the story of the playable protagonist, a young witch who inadvertently escapes her (or his) magical realm and ends up at a human summer camp. The concept was first pitched several years ago as an animated children’s series by Kelly Shay, who eventually became creative director on the video game version.

“It went through a lot of different phases; it was built and rebuilt a few times, and characters came and went,” explains Camp W narrative director Alexei Bochenek. “In the end, the pitch never sold to become [a] series, but it got real close, and over the course of pitching it, I think it got a lot of extra love in development, because it was so close.”

“Interactivity is coming to our entertainment more and more as time goes by. Netflix has been playing with branching stories on its platform as well,” says Bochenek, in reference to Netflix titles like the Puss in Boots spinoff Puss in Book and Buddy Thunderstruck. “I think that this was a play to get involved with interactive entertainment on a level [where] we could really be leaders in that field and do some experimentation.”

Of course, marrying two internally developed products had an obvious added benefit over selling Camp W to a network or letting someone else launch the inaugural project for Branching Storywriter.

“We could self-fund and self-publish, and in that way we could really be attached to the intellectual property. It could be a way that Psyop could move from just primarily making content for other companies as advertisement,” says Bochenek. “We could fulfill this goal that Psyop had internally, to make our own intellectual property, which is something Psyop has been doing on and off for years.”

Camp W’s gameplay largely consists of reading dialogue, the bulk of which Bochenek wrote himself, and making choices at various stages. The final script ended up clocking in at around 70,000 words, although of course the player would have to play through multiple times to experience it all, because there are six possible endings to the game (seven, if you count the “secret” ending involving Norm, the camp cook).

The cast consists of the playable character, who is a young witch named either Liliandra or Lysander, a squirrel sidekick Nugget, and a motley crew of other young campers. One of Shay’s favorite characters is Sophie, a girl who quickly befriends the playable character and has a distinctly “witchy” vibe, though she doesn’t have any magic powers of her own.

“We had an original thought of, okay, we’d have this shy girl named Sophie, and [I] had her name and a little bit about who she was,” says Shay. “But as far as how she looked, Alexei and I worked together in reworking her style. And then it was so cool to work with him to give her her voice, too, which I originally didn’t have.”

The narrative and visual aspects of the game go hand-in-hand to create a satisfying experience for an all-ages audience. Once Bochenek unearthed Shay’s original pitch, the two worked closely to ensure that the outcome was unified and engaging. Though Shay had already developed much of the visuals years before, many of the game’s elements went through extreme transformations before reaching an end result. According to Shay, Bochenek’s narrative ideas greatly influenced the visuals, and vice versa.

More broadly, Shay says she wasn’t looking to any particular source for visual inspiration. Her impetus was more about creating a world befitting the story.

“You’re this young girl or boy who’s coming to this new world, and I feel like as a kid you see things more in an exaggerated way. So I wanted it to be really bright, and yet the color palette is a little more of a secondary color palette — oranges and purples, with this off-kilter exaggeration,” she explains. “It’s really about making environments that we all would want to be in, and making characters that really pull you in and make you want to get to know them.”