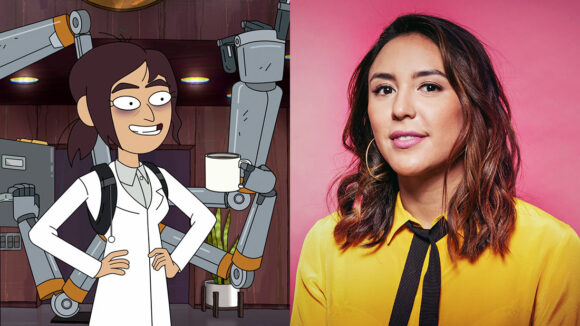 Conspiracy theories, ever more prominent in the real world, are made literally real in Inside Job, which launches on Netflix today. The satirical series is set in a company that orchestrates conspiracies on behalf of a shadow government. It centers on Reagan, a neurotic tech whizz who leads a team at the organization alongside cheery yes-man colleague Brett.

Inside Job is the brainchild of Shion Takeuchi, a former writer on Disney’s Gravity Falls and Cartoon Network’s Regular Show who went on to sign an overall deal with Netflix. This is the first product of that partnership — her first time as showrunner. She discusses the series with INBTWN Animation, the online event partner of Cartoon Brew, in a wide-ranging conversation you can watch below:

The show is billed as the first adult series to be made at Netflix’s in-house animation studio. Takeuchi says the infrastructure was being assembled around her team as they worked. “There were some trials in that regard … but still, I think that the excitement of a new studio also feels like it galvanizes people to be like, ‘We can do anything.’”

Takeuchi discovered what kind of leader she is along the way, mirroring Reagan’s own journey. “I’m not really a Brett,” she says, explaining that she isn’t one to constantly crack jokes. She adds, “A useful thing is to surround yourself with Bretts so that they can carry that load and you can just feverishly work like a gremlin in the background.”

She nods to the support she received from old Gravity Falls colleague Alex Hirsch and Bojack Horseman supervising director Mike Hollingsworth, who both executive-produce here. She also describes the input of Ottawa-based Jam Filled Entertainment, which handled animation on the show, and Paris, France’s CRCR, which did the title sequence.

Inside Job was animated in Toon Boom Harmony. Takeuchi wanted characters who suited the series’ outlandish tone while also being able to convey nuanced emotion. Jam Filled came up with complex rigs: they had “a node for every single eyelash.” She also touches on the unconventional art direction, which draws on the aesthetics of old conspiracy footage and xeroxed redacted documents.

The entire 10-episode first season of “Inside Job” is now available on Netflix.