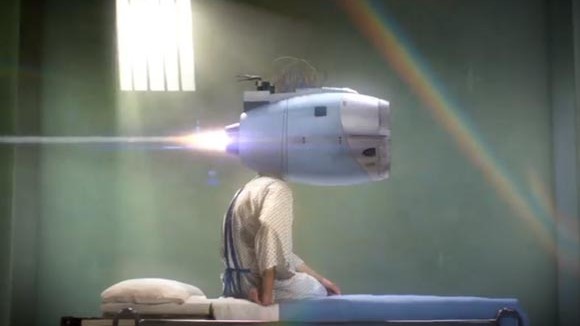 The three-minute piece serves as a trailer/supplement to an original radio drama based on the album, written by playwright Sir Tom Stoppard, premiering on BBC Radio 2 on August 26th. Dubicki also created an extended film loop that will complement the audio experience online.

More details about the production from the official Aardman release:

Aardman director, Darren Dubicki saw the piece working as a film trailer and the team spent time absorbing the rich detail from both Pink Floyd’s music and Sir Tom Stoppard’s play. In doing so they developed a striking visual concept where images juxtapose with carefully considered lyrics and dialogue from the play encompassing the underlying themes of greed, conflict, consumption, humanity and the descent into madness…

Dubicki says, “What was fundamentally important to us was that we retained a consistent visual tone that echoed the imagery created over the years for the band. The intensely surreal and powerful artwork created by Storm Thorgerson and Hipgnosis has always had a strong distortion on reality. Their sense of space and twisted context make for some uncomfortably beautiful art. This tone has been consistent for decades and we wanted to honor this with our contemporary digital (and analogue) slant on the style.”

Created using a collage of digital imaging, CGI, studio-based effects and hand crafted elements the films were produced with depth and richness that reflects the classic tone of Pink Floyd’s art.