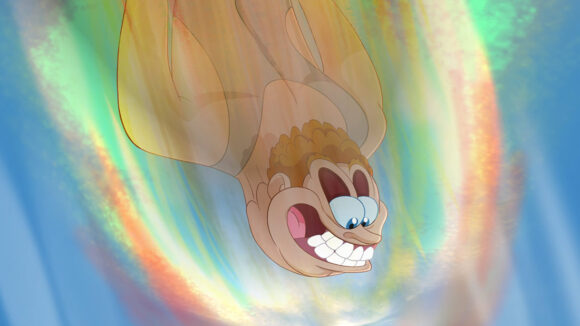 On the surface, an anniversary seems like an unusual time for a makeover or re-branding. It’s usually time for celebrating the accomplishments of the past or just being content to still be breathing. Yet, many of us use these life markers (whether it’s New Year’s resolutions or birthdays), to motivate ourselves by mapping out new directions. And that’s just what the folks at Montreal, Canada-based Studio Pascal Blais did when they turned 35 and up and changed their name to Tonic DNA.

Co-founded in 1983 by Pascal Blais (who has since left the studio) and Bernard Lajoie (who remains a partner and executive producer at Tonic DNA), Studio Pascal Blais was a widely respected Canadian animation studio known for producing high quality 2d advertising projects and for working with acclaimed animation artists like Sylvain Chomet (The Old Lady and The Pigeon, 1997), Alexander Petrov (The Old Man and The Sea, 1999) and Cordell Barker.

The studio rebranding was not something that materialized overnight. “It was something that we’d been thinking about going back about 10 years,” says Howard Huxham, Tonic DNA vice-president and executive producer. Huxham attributes a changing advertising and animation landscape for the decision to rename. “There’s such a high turnover in advertising agencies,” explains Huxham who started at Studio Pascal Blais in 1991. “Every five to ten years, some people haven’t got a clue who we are or who we were and our name’s just not memorable and retainable outside of Montreal. The name was often misspelt and mispronounced.”

And despite working in different styles and techniques, the studio remained labeled as a 2d shop. “Even in the last year,” adds executive producer and partner Stefanie Bitton (who joined Pascal Blais in 2005), “agencies still saw us as a 2d studio. It was tough to break into these other areas. We had to break away from that in order to have a more level playing field.”

Bitton thought that the studio should use their 35th anniversary as the impetus to change things up. And with the studio (now housing 90 staff) moving to a new location along the cobblestone streets of Old Montreal and Pascal Blais exiting the company, it was the perfect time to make the change.

In search of something “big, bold and memorable”, they went with Tonic DNA. “DNA,” adds Bitton, “is short for ‘Directors and Animators.’

The new name shifts things away from the individual to something more collective. In the 1980s, it was fairly common to name a studio after the creative director who helmed the studio and dictated the overall vision (e.g. Kurtz & Friends, Michael Mills Productions, Potterton Productions). As Studio Pascal Blais expanded beyond Quebec, they brought in other artists who worked with different techniques. “Sometimes it was contentious,” admits Huxham. “We had directors we were working with who didn’t get the same type of billing within the company structure as others. We felt if we are going to be more diverse and represent different voices and styles then we should have a name that’s a bit less polarized to one individual and one style.”

“Our artists,” adds Bitton, “are very important for us so we wanted to put them in the forefront and have them included in the name. And for us, Tonic means energizing, fresh, and dynamic, so this felt more in line with our new direction.

Part of that new direction is expanding the studio’s profile beyond advertising. Although it’s a long shot that Tonic DNA ever produces indie shorts again (“We’d love to do it,” says Huxham, “but how do you make money? Even if you win an Oscar, it’s a hard market.”), they have continued putting together an impressive roster of directors including Oscar nominees Cordell Barker (The Cat Came Back, Stranger Invaders) and Robert Valley (Pear Cider and Cigarettes) along with Dale Hayward and Sylvie Trouvé (Bone Mother), and Malcolm Sutherland (Umbra, The Forming Game, The Astronomer’s Dream).

While no short films are on the horizon, they are developing an original half-hour special with Cordell Barker and have a few more originals that they hope to pitch to broadcasters. Huxham views the studio’s relationship with directors escalating beyond just representation. “We are chaperoning them, developing projects together, finding financing and organizing pitch meetings. It’s great to have these strong, talented people as part of the extended family. We usually find them or they find us through festivals.”

Tonic DNA is also taking on longer projects including Dr. Seuss’ Green Eggs and Ham, the 2d animation series for Netflix and Warner Bros. Animation coming out in 2019, along with a series of shorts for Warner Bros. as part of its Looney Tunes reboot (which will entail 1000 minutes of new content, ranging from one to six minutes in length, and distributed on multiple platforms, including digital streaming, mobile devices, and tv.) While Tonic DNA can’t say much about the projects at the moment, Huxham is particularly excited that both projects are eschewing “cut out stuff” in favor of hand-drawn animation: “The boom in 2d is exciting. Studios are looking to rejuvenate that look, and hopefully the budgets will follow to allow us to do more of that kind of work.”

As the distribution paths of these new projects suggest, Tonic DNA is working in a dramatically different broadcast landscape from their days as Studio Pascal Blais. Gone are the days of weekly episodes or making advertising spots solely for tv. “It’s a bit like the wild west,” says Huxham. “There are all sorts of formats and social outlets. There’s a greater hunger for content and fewer rules so far. It’s mind boggling that we can work five years on a 13-episode series, but people can binge-watch it in 24 hours. It’s exciting. Metrics are instantly available. We can find out how many people watched an episode…what episode did they stop watching? …what minute?…what scene did most people turn off?…was it a character? As a producer, you know instantly.”

Adds Bitton, “In terms of advertising, five years ago it was all for broadcast Now, 50-60% of the work is for social. Television is just one little part of the whole campaign. People are watching Youtube, Snapchat, Netflix. They’re not watching traditional television anymore.”

Tonic DNA has a different feel and attitude than many studios. While most studios are just happy to get any work that comes their way, Tonic DNA is more selective. “We don’t want to just take on any project or bring something in that’s not good for the studio,” says Huxham. “We want to grow at a reasonable rate and take on projects that are good for us and that are going to help us and be the right fit in terms of budget and quality and schedule. I’d rather be a Passion Pictures than just another company doing the mainstream factory stuff. Mainstream series production work has never really fit for us. We want the best possible talent to work with and the best possible project.”

“What I love with the new identity of the company,” says partner Bernard Lajoie, “is how complementary we all are now, with a common goal to do quality work for like-minded clients and with like-minded artists.”

For the moment, Tonic DNA can afford to be selective. The success of their advertising division is allowing them to be pickier when choosing longer-format projects. “Everyone has the same vulnerability,” says Huxham. “We do our best to bring in work that we want to do and that we [are able to] make money on every project. We’re lucky to have an iron in the commercial fire because that’s a good cash stream. It allows us to have a test bed for styles that we want to develop and to bring in people to test them out on a short term basis.”

And where do the Tonic DNA folks envision the studio heading in the next few years? “Running a studio a little bit bigger than this,” admits Huxham. “With the same quality and legacy…a studio that’s known for quality entertainment and a good reputation among artists…not at expense of the artists’ happiness or pocketbook.”