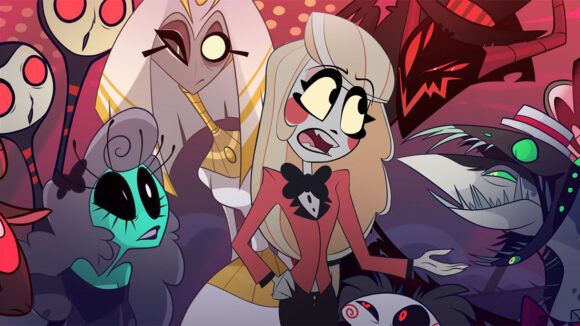 A24, the independent distributor and production company known for art house hits like Uncut Gems, Lady Bird, and Moonlight, announced this afternoon that it will produce a series based on the online pilot Hazbin Hotel.

Hazbin Hotel creator Vivienne Medrano launched the pilot on her Youtube channel last October, and it has since been viewed over 41 million times. She spoke with Cartoon Brew last year about how she built her online Youtube presence Vivziepop, which currently has over 3.6 million subscribers.

Here is the synopsis for the adult-skewing Hazbin Hotel:

Follow Charlie, the princess of Hell, as she pursues her seemingly impossible goal of rehabilitating demons to peacefully reduce overpopulation in her kingdom. After a yearly extermination imposed by angels, She opens a hotel in hopes that patients will be “checking out” into Heaven. While most of Hell mocks her goal, her devoted partner Vaggie, and their first test subject, adult film-star Angel Dust, stick by her side. When a powerful entity known as the “Radio Demon” reaches out to Charlie to assist in her endeavors, her crazy dream is given a chance to become a reality.

Medrano is the fourth creator out of the School of Visual Arts in New York City who has inked a series deal in recent years, the other three being Steven Universe’s Rebecca Sugar, Breadwinners’ Gary “Doodles” DiRaffaele, and The Owl House’s Dana Terrace. Unlike the other three creators, Medrano pursued an independent route and developed and produced her original pilot without any studio involvement.

A24 has not announced any details about the series format, or when and where it will premiere.