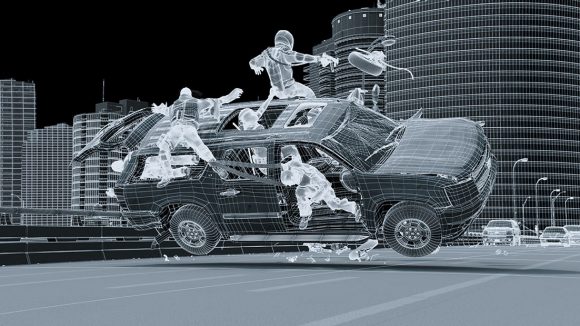 The most recent winner of the Academy Award for best visual effects, Ex Machina, surprised many when it took out the top prize at the 88th Oscars. Could the winner of the next vfx Oscar also be a relative outsider? Cartoon Brew previews this year’s contenders. (Later this week, we’ll take in-depth looks at the contenders in the animated feature and shorts categories.)

But first, a quick refresher on how the vfx Oscar works. The Visual Effects Branch Executive Committee of the Academy first devises a list of 20 films for further consideration (this list should be announced publicly in early-December). The list then gets whittled down to 10, which then goes to the VFX Bakeoff. It’s here that the filmmakers (typically the overall visual effects supervisor) present on the film via written material and present excerpts of the work, but no breakdowns.

From the Bakeoff comes the list of five nominated films that will then be voted on by all members of the Academy. The rules state that the eligible films for a vfx Oscar are to be worked out on the basis of (a) consideration of the contribution the visual effects make to the overall production, and (b) the artistry, skill, and fidelity with which the visual illusions are achieved.

OK, now you’re up to speed on how the voting works. Here’s a look at the state of play with the films that could be competing for best vfx, sorted into most-likely, likely, and outlier contenders.

The stand-out amongst the crowd in the ‘most-likelys’ is Jon Favreau’s The Jungle Book. Essentially shot entirely against bluescreen with only one live-action actor, the film made the most of virtual production techniques, detailed animation, and advances in photorealistic rendering to bring its cg characters to life. Plus, it was a hit with audiences and, you can assume, Academy voters.

Another thing on The Jungle Book’s side is that Disney made no secret about the amount of CG in the film—sometimes studios don’t like audiences to peek behind the curtain—possibly partly due to not necessarily being able to rely on a main star actor to promote the film. That means there’s been a lot of behind the scenes featurettes about the final visual effects, as well as some looks into the on-set puppeteering and special effects needed to help integrate live-action with CG.

You can expect Disney to engage in a slightly different kind of marketing behind the visual effects of Rogue One: A Star Wars Story. Here, as they did with The Force Awakens, Disney is likely to highlight the practical shooting side of the filmmaking, even though of course digital visual effects are likely to be a key part of the final product. Arguably, that’s a response to an on-going commentary about films being ‘too-CGI’, causing some filmmakers and studio marketing teams to talk up the practical aspects. Still, based on the trailers and clips released so far, Rogue One has to be a shoe-in for a vfx nomination.

Captain America: Civil War is another film that could easily sell its practical shooting wares, despite a whole lot of digital work (consider the airport sequence, for example). Marvel hasn’t yet had any luck in the vfx Oscar race, although several of its films have been nominated in past years. One thing that Civil War has going for it, in particular, is how many of its characters were digital creations or hybrids – Black Panther, Spider-Man, Iron Man, Captain America—without the audience necessarily noticing.

With its kaleidoscopic and psychedelic scenes, Doctor Strange is almost the most ‘effectsy’ film of the most-likelys. It’s one of the big event films of the year, too, which will bring its effects much attention. Right now, the trailers are showing off some of the city folding Inception-like mind-bending imagery, but Marvel does always tend to leave more up its sleeve and each of their films tend to have one huge, memorable sequence (often achieved with spectacular visual effects).

Batman v Superman: Dawn of Justice didn’t win much approval at the cinema when it was released, but there’s certainly a lot to admire in its visual effects. One area likely to be pushed is the blurring of the lines between real and digital characters. In many films, an edit to a wide shot and then a close-up will evidence the change between real and digital, but on Batman v Superman, those transitions are often indistinguishable. It’s a big accomplishment and helped with the storytelling in this fast-paced actioner.

There are simply more and more films each year featuring stunning vfx artistry, and that means there are more Oscar contenders (that’s one reason the Academy did up the number of possible nominees from three to five in 2010). Here’s a collection of films that could easily find themselves nominated.

Warcraft and The BFG are two possibles, both pushing the boundaries of performance capture. Despite their high tech approaches, each film was able to deliver characters with strong emotion that could also see digital actors being the subject of more discussion this year (previous work involving performers such as Andy Serkis has often stirred debate in the vfx Oscar category).

Deadpool and X-Men: Apocalypse are superhero films that might benefit from each having a couple of stand-out vfx sequences, the kinds that audiences talk about long after the film is over. In the case of Deadpool, that’s the highway chase, and in Apocalypse it’s the Quicksilver mansion rescue, possibly the best visual effects scene this year. Add to the mix Suicide Squad, which included a mix of grounded effects and some much more magical, fractal-based work.

Star Trek Beyond showcased a new approach to Trek vfx, via Fast and the Furious director Justin Lin. That required some extra grittiness to the outer space shots as well as the usual high-fidelity alien creatures and ship realizations. We’re likely to see a similar high fidelity in the space adventure Passengers, although we won’t know the full extent of the vfx until December.

The as-yet unreleased Fantastic Beasts and Where to Find Them is one of the harder ‘likelys’ to assess. There’s clearly going to be a lot of vfx artistry involved in bringing to life its several Beasts and magic effects, but will it take things beyond what the previous Harry Potter films were able to achieve in visual effects? It’s another film to wait-and-see.

The vfx Oscar does tend to include outliers—those films that gain nominations but that no one thinks will necessarily win (until they do, like Ex Machina). In previous years, other outliers might include Hereafter, Snow White and the Huntsman, and The Lone Ranger. Each had complicated and impressive visual effects, but leaning towards ‘invisible’ variety. For this reason, a couple of films with seamless and slightly different approaches to their visual effects just might make the list.

One is Deepwater Horizon, the story of the drilling rig disaster in the Gulf of Mexico. The spectacular explosion and sinking of the rig came together on film via an enormous scale set that was filmed with the aid of huge LED screens standing in for interactive lighting, then heavily augmented with digital sets, backgrounds, fire, and smoke. Few might notice the extent of the vfx work, and that would be a big factor in the film’s favor.

Another is Voyage of Time. Terrence Malick looked to many practical visual effects approaches to tell his origin of the universe story (and the death of it, too). It’s possible the film’s old-school approaches with cloud tanks, motion control shoots, and hands-on effects photography could resonate positively with both a visual effects and Academy voting audience.

What do you think? Let us know in the comments which film you believe will be a vfx Oscar contender.