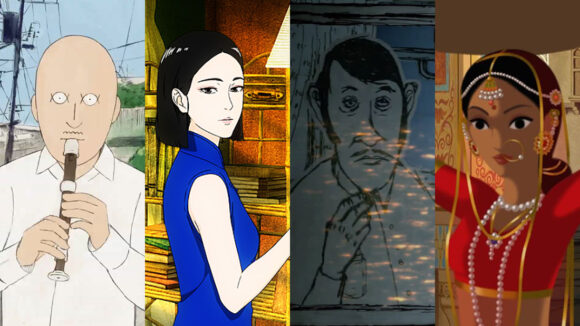 Last year’s Oscar race for best animated feature ended in a fairly predictable clutch of big-studio nominees, and a win for Pixar’s Toy Story 4. Earlier in the process, however, we saw something remarkable: a record 32 titles were submitted for the category, the list reading like a catalogue of striking films from around the world.

We don’t yet know exactly which films will qualify this time around. Thanks to the pandemic, 2021 is unlikely to trouble 2020’s record for submissions. That said, this year has seen a good number of excellent independent features that would make for worthy nominees (and even — whisper it — winners).

We’ve rounded up four that performed well at festivals and are likely to be submitted to the Academy. Aside from anything, they remind us that there isn’t — or shouldn’t have to be — anything inevitable about Hollywood’s dominance at the awards …

Iwaisawa’s utterly surprising debut feature follows three high-school deadbeats who form a band, despite not knowing how to play music. Their spirit is mirrored in the film’s production: the rotoscoped animation was carried out over years by a team composed mostly of amateurs. Brilliantly droll and endlessly inventive, On-Gaku: Our Sound is a gem of Japanese indie animation.

This luminous portrait of a fascinating city weaves together multiple subplots, each focusing on a different kind of impossible love. Bombay Rose is that rare thing: an animated film about (and from) India that tells a story of ordinary contemporary folk, not of fantasy or folklore. The painstakingly hand-painted film went down well on the festival circuit — and with our own reviewer Carlos Aguilar.

Kill It and Leave This Town

Far from killing and leaving it, Wilczyński returns to his hometown, the Polish city of Łódź, in this melancholic autobiographical work, bringing his childhood back to life in a series of hallucinatory sketches. The multidisciplinary artist made this film firmly on his own terms, working alone or with a skeleton crew over 14 years. He described it to us as “the first feature animated art film in the history of Polish cinema.”