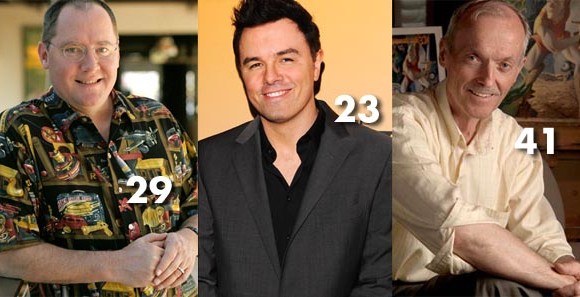 “Animation is a young man’s game,” Chuck Jones once said. There’s no question that animation is a labor-intensive art that requires mass quantities of energy and time. While it’s true that the majority of animation directors have directed a film by the age of 30, there are also a number of well known directors who started their careers later.

Directors like Pete Docter, John Kricfalusi and Bill Plympton didn’t begin directing films until they were in their 30s. Don Bluth, Winsor McCay and Frederic Back were late bloomers who embarked on directorial careers while in their 40s. Pioneering animator Emile Cohl didn’t make his first animated film, Fantasmagorie (1908), until he was 51 years old. Of course, that wasn’t just Cohl’s first film, but it is also considered by most historians to be the first true animated cartoon that anyone ever made.

Here is a cross-selection of 31 animation directors, past and present, and the age they were when their first professional film was released to the public.