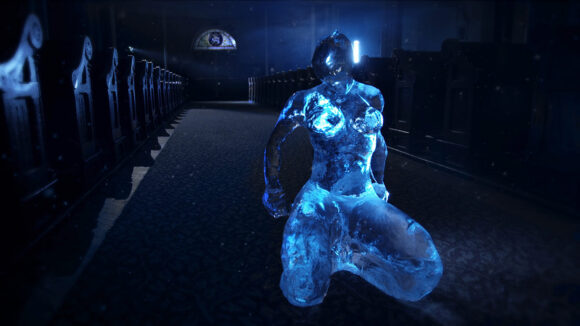 Thirteen years elapsed between the suicide of Chris Dainty’s close friend, the artist Shannon Jamieson, and the completion of Dainty’s film about her life, Shannon Amen.

Much happened in that time. The Ottawa, Canada-based filmmaker teamed up with his wife Jennifer to launch Dainty Productions, a 2d commercial animation studio. He became involved with ice carving, which led him to experiment with animating his sculptures in stop motion — a process he dubbed “icemation.” In the meantime, the idea of making a film about Shannon simmered in his mind, until he pitched it to the National Film Board of Canada in 2014. They accepted, and Dainty set about developing his first independent short.

Initially, Dainty set out to depict multiple versions of Shannon, with each representing a different style of art and period in her life. But, as he tells Cartoon Brew, “it became confusing to the audience to figure out who was who.” He refined his hybrid approach, eventually deciding to tell her story through a combination of 2d animation, icemation, and her own work. “I tried to have the styles set up Shannon into the perspectives we see: 2d animation (the person I knew), ice (her inner self), and photos and videos interjecting the story with her own raw perspective.”

He breaks down the creative process behind these three elements below, in an edited transcript of an interview conducted by email. Shannon Amen premieres tomorrow at the Ottawa International Animation Festival.

Dainty: Shannon left behind a huge collection of art. It was easy to get lost in all that. Prior to her death, she had given me a large amount of her digital photos from our artistic collaborations and adventures, so I knew those would be important in the film. Ellie, Shannon’s mom, also helped me go through the physical art. Everything I found felt sacred, and emotionally, I felt like I was slowly getting to know a new reflection of Shannon.

I discovered lots of art in the process. One piece that really made an impact on me was a charcoal image on paper, which I had never seen before. It’s based on a photo I had taken of her and her then-girlfriend in an old barn. It was done under her direction for an art project of hers. I was so happy to find this piece. The photoshoot I did for her in the barn is heavily featured in the film [see clip below]. Using this piece of artwork, I was able to transition from the photograph I took, to the artwork she made, and then animate that artwork to further the story.

I really tried to let Shannon’s art drive the film, and I often re-looked through it all to try and find the best ways to incorporate as much of it as possible. Working with Maral Mohammadian as the producer and Jennifer Dainty as the line producer was absolutely key.

Chris Dainty: I used 2d animation as a way to bridge everything and make it all come together narratively. The film is a mixture of reality and memory, and I felt that having [a] bold, more saturated color scheme conveyed this feeling. Shannon’s works were often bold as well.

Izzy Campbell was key in creating the look of the 2d animation. After each 2d scene was animated, Izzy cleaned it up and digitally colored each individual frame. It took a huge amount of time to do, but the result is beautiful and the consistent style that was created using this method is perfect for the film.

Every frame of 2d animation has Shannon’s artwork somehow incorporated into it. After the animation was colored, we had Elise Simard add post-color texturing, working with high-resolution scans of Shannon’s artworks and applying the textures digitally onto the characters. There are also scenes that are animations of her artwork.

Dainty: In 2015, I partnered with ice carver Kevin Ashe at the International Winterlude Competition, where we carved a tree composed of human bodies. The human form is one of the most challenging things to carve in ice, but that experience gave me confidence that we could create something on an epic scale with full-scale human sculptures for this film.

We use special ice-making machines that have a continuous flow of water, which is how the ice blocks are made to look crystal clear. It takes 65 hours to freeze a block of ice in the machine, and each block weighs 300 pounds. We carve the ice inside a giant walk-in freezer and we also store the finished carvings there. The length of time varied depending on the sequence we were making, but they all took anywhere between three to six hours per sculpture. I estimate that we used around 60 blocks in total.

The main challenge is the ice breaking. We wrapped all the sculptures in bubble wrap and secured them so that they wouldn’t fall over and break in transit. Luckily, we only had one head and an arm break. Another challenge was completing the filming before the ice started to melt. We filmed over two nights, a couple of months apart, but both times in winter temperatures. We did have carvers carving almost the entire time to replace pieces as we went, and also to re-finesse the details in the faces, which you slowly lose during melting. We were also able to fix up a few things that broke using water as natural glue.

Dainty: Traditional animation was done on paper or digitally with Adobe Animate, Harmony, or TVPaint, depending on the animator’s preference. Animation was cleaned up by Izzy Campbell in Adobe Animate CC to create a flat layer. The next step was adding Shannon’s artwork textures to the animation, which was done by Elise Simard with After Effects. We used Photoshop for the backgrounds. We used Dragonframe for the icemation filming and special effects were done using After Effects. All birds were hand-painted using a thick black gel paint and then put together with Adobe Animate and composited with After Effects.

See the film’s production in action in this short making-of documentary: