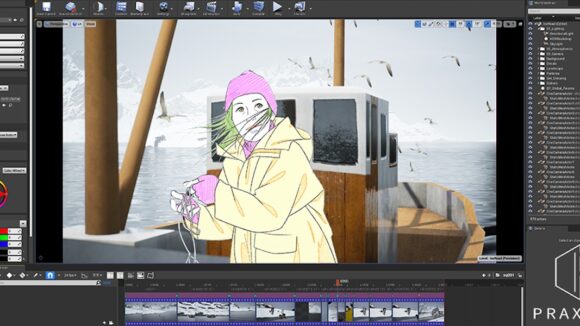 Originally designed for video games, real-time rendering solutions like Unreal Engine are increasingly being used in the animation industry for their flexibility in the production of cg series and films. However, game engines have often been oriented toward pure technicians and engineers, leaving graphic artists aside in the process.

This issue was what French startup Praxinos hoped to address when it developed and released a painting tool for Unreal Engine. Below, Elodie Moog (company manager) and Fabrice Debarge (CTO) discuss the company’s projects.

How did your crew come up with the idea of adding a drawing tool to a game engine?

Elodie Moog: This idea came naturally: on the team, we’ve all been working in the animation industry for years, not as artists, but as software developers and technical agents. We’ve been following various productions over the years, and we’ve slowly realized that the time when animation productions would be either full 3d or full 2d was over. The war launched in the late 1990s and early 2000s between 2d and 3d has come to an end: their production costs are the same, they both require computers to be efficient, and animation students are trained in both techniques.

Over the last decade, more and more productions have been mixing 2d and 3d in various and clever ways: you will find 3d props in traditional animated films like Ethel and Ernest by Lupus Films and 2d animation in 3d movies like The Peanuts Movie by Blue Sky Studios. Sometimes, 3d and 2d are directly connected in the making process, like the brilliant music video “Freak of the Week” by Juanjo Guarnido.

Fabrice Debarge: 2d and 3d techniques combined with the emergence of real-time rendering solutions offer even more possibilities in terms of creativity. Fortunately, after we created Praxinos in November 2018, we had the great opportunity to meet staff from Epic Games. They encouraged us to follow this path, and that’s how we came out with an ambitious project codenamed Odyssey, which will be a standalone 2d animation software within a 3d real-time environment powered by Unreal Engine.

How can a game engine be an advantage for 2d and 3d animation?

Real-time engines can also serve 2d animation in many ways. Colors, textures, shadows, lights: any of these can be visible immediately and compositing won’t be destructive anymore. Let’s go even further: at the moment, when traditional animators work, they must alternate between flipping and drawing their animation. With a real-time solution, you can play your animation and modify a specific drawing at the same time, which is a real paradigm shift.

Odyssey sounds promising! But then why did you pause Odyssey to create a painting plugin?

Elodie: We’ve never paused Odyssey: ILIAD (Intelligent Layered Imaging Architecture for Drawing), our painting plugin, is just Odyssey’s first brick. Unreal Engine is an incredible software for virtual productions, but adding a 2d animation tool in it is not a small matter.

Fabrice: Two years ago, when we created Praxinos, Unreal Engine did not even have a drawing tool. And if you can’t draw, how can you make 2d animation? It means our team had to create a specific interface and build a brush engine compatible with graphic tablets.

We could have chosen a simple solution with basic default pencils and an eraser, but it would have been too poor and limited. Instead, we decided to base our brush system on Blueprint, a nodal scripting language derived from C++ and available in Unreal Engine, which offers almost endless possibilities.

Elodie: Long story short, once we had the possibility to paint with Odyssey, we realized we would need at least two years to finish this software. The idea to work “underground,” without telling anyone of our plans for such a long time, seemed like a very lonely and risky road. So we made a bold choice and dedicated a few months of development to adapt Odyssey’s painting module as a plugin for Unreal Engine, just a few weeks before Annecy 2019. This is how ILIAD was born, and it was undoubtedly the right choice.

Can you tell us more about ILIAD?

Elodie: ILIAD is a free painting plugin for Unreal Engine that allows you to edit textures used on 3d objects. This ability to modify UV map textures is a true game changer — no pun intended — as it enables new working habits within a real-time rendering solution like Unreal Engine.

For instance, the possibility to easily create variations on a character — skin color, hair, clothes, eyes, or details like bruises, scars, makeup, and tattoos — while playing the scene is mind-blowing. For collaborative work, it’s a considerable time saver. Even for broadcast and film production, it gives a real advantage, as you, the graphic artist, can be on a set with cameras and technicians ready to shoot a scene that requires you to make small changes on the fly to props and characters.

Fabrice: But ILIAD can do more than simply edit existing textures: it can also create new textures, which was not possible in Unreal Engine without our plugin. It may seem trivial, but this is really helpful on many occasions.

Without ILIAD, if you need to create a decal, a scene texture for post process, or a stylized foliage, you have to use a third painting software, export the image, import it in Unreal Engine, set up the shader (named “material” in Unreal Engine), and check if it works. If it doesn’t, you have to go back to the third software, edit your image, and repeat the previous steps all over again. This is not the most fluid workflow.

With ILIAD, you just have to create your texture and the material once, and then any changes made in the texture will be automatically updated. The slightest change, like layers’ opacity, blending mode, or visibility, will be immediately updated on your assets, in the level.

Elodie: Plus, ILIAD can now edit static meshes directly on Unreal Engine levels. This brings new uses for artists, as they can use this feature to draw sketches or write notes for themselves and their coworkers. As Epic Games is developing more and more features to directly animate 3d characters in Unreal Engine, having a drawing tool nearby can be handful for animator supervisors who need to fix posing, timing, or facial expressions.

In this industry, we often see ambitious projects that will never be completed, mostly for financing issues. ILIAD is a free plugin, so how do you finance your project?

Elodie: Giving ILIAD away for free is something we hesitated over for a while. On the one hand, we needed to make a living; on the other hand, we wanted to encourage Unreal Engine users to try our plugin and give us feedback based on their experience. The best way to do so was to release ILIAD for free as a beta version only.

We decided to make it free forever after we received a Mega Grant from Epic Games. It was a great decision, since ILIAD is now in the Permanently Free Collection of Unreal Engine Marketplace, and you can download its sources from GitHub.

In addition, we benefited from several regional and national subsidies from the French government to support the development of Odyssey.

Fabrice: In parallel, we offer a variety of services, such as the preparation of financing files to support innovation in the animation industry, and specific development on Unreal Engine. We also developed a graphic library (named ULIS) that answers specific needs related to digital image processing: the code of this library is free, but its use for commercial projects needs an extended license with a cost.

We also started to sell content on the Marketplace, starting with a pack of 120 brushes. We also count on future preorder sales of Odyssey as soon as the project will enter its beta phase.

Elodie: But if Cartoon Brew readers want to join in our Odyssey, we will be glad to have their financial support on Patreon for a few bucks a month.

The first step — having a drawing tool — is done. What’s the next step in Odyssey’s development?

Fabrice: Now we’ve got the drawing tool, we need a module to manage scene placement in both time and 3d space. The best way to think of this module and its concrete use is to imagine it as a storyboard and animatic tool. That’s how we imagined EPOS, our next plugin for Unreal Engine.

Elodie: Think about how great it would be to wander in your 3d landscape, choose the right angle, and then press a button which automatically creates a camera in your 3d environment, a scene within a timeline, and a transparent board ready to be sketched! That’s exactly what we’re developing right now, and if everything goes well, we should have a first beta version between spring and summer 2020. We will then start a beta-test program based on selected profiles, so if anyone’s interested, please submit your application for the beta-test program by filling out this form.

Fabrice: And we have some good news: our associate Antoine Antin has recently joined our workforce to help on very specific projects at Praxinos. Antoine is a storyboard artist and key animator who worked on various worldwide productions, such as Kung Fu Panda 3 at Dreamworks, The Red Turtle, and Napping Princess. We are so thrilled to have him on board!

We can’t wait to know more about Praxinos team and projects! Any last words to conclude this interview?

Elodie: I would like to draw everyone’s attention to the fact that we really want to grow a community around Praxinos. The weird situation caused by Covid-19 cut us off from all animation-related events: no Cartoon Movie or Cartoon Forum, no Annecy Festival, no CTN Animation Expo or ACTF. It makes things harder to start relationships with new fellows.