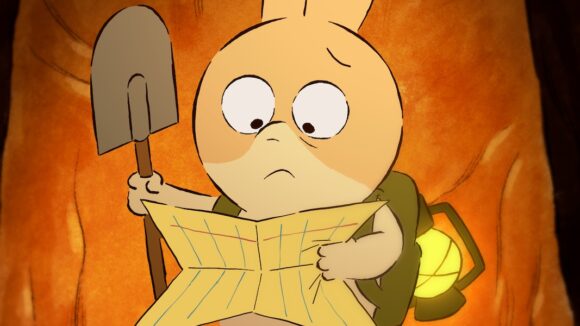 Welcome to our series of interviews with the directors of this year’s Oscar-nominated animated shorts. Every day this week, we’ll be speaking with one of the five nominees in the category. Today’s guest is Madeline Sharafian, director of Burrow.

Eight years ago, Sharafian found viral success online with her short Omelette while she was still a student at Calarts. Not long after, and thanks to that popular calling card, she got her first job in the industry working on Daniel Chong’s We Bare Bears at Cartoon Network, as a writer and storyboard artist. That first opportunity led to her getting an internship at Pixar during her second year in school.

Entering the renowned Emeryville company meant a sharp learning curve for Sharafian, who was used to working on projects in which the storyboard translated almost directly into the animation. Her first assignment at Pixar was as a story artist on the 2017 feature Coco. This represented an artistic challenge for her, particularly due to the 3d camera moves director Lee Unkrich required. But she pulled through.

In 2019, producer Lindsey Collins invited Sharafian to apply to the studio’s Sparkshorts program, a talent incubator aimed at giving emerging talent within its ranks the chance to make a short film in a six-month timeframe, from conception to delivery. Sharafian’s pitch for Burrow, which is now nominated for an Oscar, earned her a spot among the artists selected that year.

Comfortable with hand-drawn animation, she opted to direct Burrow using that technique. She made her protagonist an expressive rabbit — an animal she identifies with. The endearing dialogue-free fable follows the fluffy heroine as she tries to build her own underground abode without help, before realizing it might too hard a task for one furry being to do alone. Animators at Pixar were thrilled to work on a hand-drawn piece and help her create the multiple underground environments for the animals to inhabit.

Sharafian recently finished working on Domee Shi’s upcoming feature Turning Red (slated for release on March 11, 2022). Shi is the first woman director she has worked with in her career. Sharafian believes that Pixar is trying, through initiatives such as the Sparkshorts program, to promote underrepresented storytellers to positions of leadership at a fast rate.

Below, she speaks to Cartoon Brew about her inspirations, creative process, and vision of a 2d-3d hybrid feature at Pixar.

Cartoon Brew: Was there a specific source of inspiration for the story of Burrow?

Madeline Sharafian: The inspiration came from two places. The visual inspiration was a concept of a rabbit in a burrow that I’d had tucked in my sketchbooks from around 2014. I was still in college when I’d started thinking, “My nickname growing up was ‘Rabbit’ and there’s something interesting about burrows and isolating yourself.”

Also, I just love cutaways, like in Wes Anderson movies, especially Fantastic Mr. Fox. That shot when they’re digging underneath the barns. I just love that so much. I thought, “What if I did a whole short just like that?”

As far as the theme goes, it was inspired by my first couple of years here at Pixar, when you so badly want to prove that you are worthy of being there. The place has such a high bar. Instead of asking for a deadline extension or for help with getting up to speed, I would just close the office door and work nights and weekends, so that when I showed stuff to the directors, they always looked like, “Oh, wow, she knows what’s going on. She’s got it.”

But what I was really doing was just pulling a ton of extra time, and I kept that going for years. That sort of thing eventually wears you down. I realized, “I can’t just keep living like this. I’ll have to leave Pixar if I keep working this way. I need to learn how to branch out, open that door, and let other people help me out if I’m in trouble.” Because it was such a Pixar experience, when I pitched that story to the animation department it resonated with a lot of people here.

Besides the fact that you had worked in hand-drawn animation before, was there another reason you felt inclined to use that technique at Pixar, a studio mostly known for cgi?

It’s not that 2d it’s any better or worse than 3d, but it’s the one thing that I can do. I tried to do 3d modeling and 3d animation in college, and I just couldn’t seem to wrap my head around it.

But with 2d you really just get to make exactly what you want, and for the short I was like, “I would like the rabbit to have kind of weird facial expressions. We can really make her push her mouth really wide in hand-drawn animation.” If we were to do that in cgi on this six-month time period, it would have been a lot harder to break the model. I love 2d for the fluidity and I like to see when other people push it in unexpected ways.

I was also giving myself a little too much of a safety net. I picked 2d because I knew I would have a lot of control. I could draw some of the backgrounds myself. I could help the animators clean up the animation so that they could keep moving forward. It definitely let me pick away at it on weekends and nights, which just made me feel a little more confident that we could finish it. That way I wasn’t asking anybody on the team to do something that I wasn’t also willing to do.

The character design in Burrow is reminiscent of classic illustrated storybooks or even the Studio Ghibli film Pom Poko. Tell me about conceiving the style and creating so many different animals for a rather short film.

I took a lot of inspiration from Studio Ghibli’s character designs. I loved that Studio Ghibli films have these really detailed backgrounds. Because of that, the characters need to be simple shapes with flat colors. That worked well for us.

I liked making each one of them pretty unique. The mole has this little headband and little belt pouch because he’s sporty and he has a brother who’s just like him. I wanted to make a world that felt like they were interesting individuals, even though they’re not talking.

It’s sort of embarrassing, but I also made their scale to fit their personalities, less so what the animal size would actually be. I designed them based on what I thought they would feel like and then I realized it when it was too late to change things. I was like, “What the heck! I’ve made the salamander twice the size of the rabbit!” But it somehow felt right to me. I liked that for this kind of short, which is supposed to be fun and sweet. So if things are kind of funky and out of shape and out of size, it just reminds me of what it felt like to be a kid.

Visually, the entire story unfolds in a flat diorama that takes us into the intimate spaces of these creatures. Why did you choose to approach the underground world that way?

When I was young, I always really liked picture books that let you find details in them. Not quite like Where’s Waldo? but more like Richard Scarry’s books, where you can see a whole town at once. If you really take your time to look at the picture, you might find there’s something fun or cute happening in this little window in the upper left corner.

I like keeping things flat so that you’re looking at it like, “Here’s the main action in the middle and then the rabbit comes in and she leaves.” But if you want you can rewatch the short and then look elsewhere in that same frame. We tried our best to hide fun little things all over the screen so that when you do watch it multiple times, there’s always something new to look at. The flatness was always inherent to the storyboards too, so it didn’t come as a surprise to anybody.

Did you always know that you wanted the film to feature no dialogue? If so, was it a time-saving decision or entirely a creative one? Other Sparkshorts projects like Out use voice acting more heavily.

It was part laziness. I wanted to just go and not have to find actors and write a script. It’s not that I’m against doing dialogue, but when I’m storyboarding the idea or doing the outline, especially for a short like this that is so visual-based cutaway pantomime, I was like, “I think we can do everything I want without it. If so, then I’ll just leave that off the list of a million things that we have to do. We have a small budget, so that also saves us some money.”

All those corners we cut — not having actors and also using Mozart music instead of a composer — was extra money. We put that into getting a lot of animators to make it look extra polished.

Did you use the state-of-the-art technology available at Pixar to invigorate your short or was this an exercise in going back to basics throughout the whole process?

We didn’t really push technology. I just used what had worked for me in the past. I made my student films with Photoshop, TVPaint, and After Effects. That’s all we used for this short. The timeframe to make these is so short, just six months. I didn’t really have the time to try a new technique. We didn’t even do the layout process.

I was kind of taking a gamble, because I was pretty sure it could work this way. We just took my storyboards, lowered the opacity, then had the background artists draw right on top of the storyboards for a layout. I was a little nervous because it didn’t feel official or detailed enough, but I had posed out my storyboards really intensely because I wanted the timeframe to be accurate. It ended up working just fine.

Do you hope to make a hand-drawn feature at Pixar? Is that a possibility considering it hasn’t been done yet there?

With Pixar, a really important and valuable thing is our technical departments. They’re always trying to push new stuff. So if I were to hope to make something at Pixar, it would have to be a marriage between the two, 2d and 3d — something interesting and different that way. You want to excite the technical departments too, and have them push things forward and try a new look. I think that would be feasible.

Maybe I would want to try to see what you could do to make 3d look like 2d. Disney’s played around with that in the past. I always loved it and I was like, “Why does it never go into the features? Why do we just leave it in the shorts?”

Sharafian’s answers were edited for brevity. “Burrow” can be watched on Disney+.

Final Oscar voting takes place on April 15–20. The winners will be announced at the ceremony on April 25. 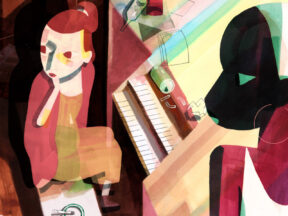