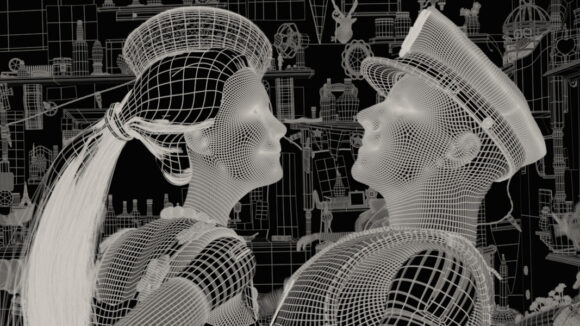 Around this same period every year is an amazing time for visual effects breakdowns. That’s because, of course, we’re nearing the end of awards season – the Visual Effects Society Awards have just passed, and the Oscars are not far away.

It’s a period in which vfx studios and film studios tend to showcase their finely edited breakdowns to the general public, often having produced them for awards submissions at the tail end of last year.

So, with that in mind, here’s a look at some of the best breakdowns available, as well as an examination of why each breakdown successfully tells the story of the work involved.

First, let’s take a look at the five films that have been nominated for the Best Visual Effects Oscar: Avengers: Infinity War, Christopher Robin, First Man, Ready Player One, and Solo. Interestingly, the exact breakdown reels submitted by those films to the Academy, and presented at the vfx bake-off, are generally not available as clips to the public. That’s because they often contain work from multiple studios, whereas studios typically release their own breakdowns for viewing on sites like Youtube or Vimeo.

Most of the awards push behind Infinity War centers on Thanos, the cg character shared by Digital Domain and Weta Digital. Those studios took performance capture of actor Josh Brolin and worked within their individual pipelines to generate Thanos (interestingly, Digital Domain developed a machine learning algorithm to help them create the character, while Weta Digital instigated a new approach of making an ‘in-between’ photoreal puppet of Brolin before transferring the capture to a cg Thanos model).

Both studios have released Infinity War breakdowns that reveal the elaborate world building and cg character building involved in Thanos shots, although these breakdowns specifically lack live-action Brolin in his capture gear. You can see that kind of footage, however, in an official Marvel featurette here. Check out the Digital Domain and Weta Digital reels below.

Christopher Robin received many accolades for the manner in which its ‘stuffed’ cg characters are integrated into the real world. The vfx work, led by Framestore and Iloura (now Method Studios), has been kept largely under wraps. But with the Oscar nomination, more information and imagery has been available about the subtle cg animation and effects. This featurette below, which has a lot of befores and afters imagery, is from BBC Click, which talked to Framestore visual effects supervisor Chris Lawrence.

First Man’s vfx breakdown, available on visual effects studio DNEG’s Youtube site (which has also just started airing a five-part series on the vfx of the film), highlights all the kinds of effects innovations used in the film, from the rear projection methods used for cockpit shots, to the miniatures and special effects elements, and the footage restoration, cg, and detailed compositing involved. Watching the reel, you might be surprised how much was achieved ‘in-camera’, something that a good breakdown can reveal in this way.

About half-way through ILM’s vfx breakdown for Ready Player One, the studio shows off its work for the The Shining sequence in the film. This is easily one of the best scenes in the movie (if not one of the best scenes from 2018). Coupled with ILM’s immense fully-cg undertakings for much of the film, their reel is a great showcase of what it took to make Ready Player One, although like the Infinity War breakdowns, there’s no performance capture footage here. Digital Domain has also made available a neat breakdown of its compositing work for Ready Player One, including that show that goes right into the main character’s vr goggles.

Like First Man, Solo’s vfx breakdowns and featurettes have leaned heavily on the practical side of the effects, coupled with the digital artistry from ILM and other studios. This video below highlights how Solo’s train heist was pulled off – the coolest part is probably the underwater miniature explosion composited into the larger mountain disintegration. It’s worth checking out ILM’s social media feeds for more excellent standalone breakdowns from the film.

Other breakdowns of note

Attention right now is on the Oscar-nominated features, but there’s plenty of other breakdowns doing the rounds. Take, for example, Unit Image’s reel showing how they made a trailer for the game God of War. Digital humans and animals, and a ton of effects simulations, are revealed here. It’s a far cry from Unit Image’s other recent work for a Disneyland Paris promo.

In the land of commercials, few recent projects are as complex as the Christmas-release John Lewis & Partners ad featuring generations of Elton John. MPC crafted the singer at different ages in cg, based on stand-in performances – they recently won a VES Award for the work. The studio’s breakdown goes into significant detail about the crafting of their digital human.

A good vfx breakdown can help the viewer understand how much work went into a shot or scene that might not initially have been apparent. This breakdown by vfx house Goodbye Kansas for The Walking Dead illustrates that perfectly, revealing the many layers and cg simulations required to deal with zombies, a bridge explosion, and a flowing river.

Back into the world of feature films, Welcome to Marwen has been talked about as having some of one of the most innovative uses of visual effects in the way it incorporated virtual production and re-projected live-action face pieces onto the cg dolls of the movie. Marwen made the vfx bake-off, but did not receive an Oscar nomination. This fun breakdown by Method Studios reveals the many facets of that work.

There’s a myriad vfx breakdowns out there right now; those featured here are just a taste. Look out for more to come as awards season wraps up and home entertainment editions of Christmas releases start rolling in. We’ve seen, for example, a whole bunch of Sony Pictures Imageworks’ breakdowns for Spider-Man: Into the Spider-Verse, and they cleverly incorporate some of the comic-book and 2d aesthetic that is also so present in the animated feature. You won’t want to miss them. In fact, here’s a taste right now.